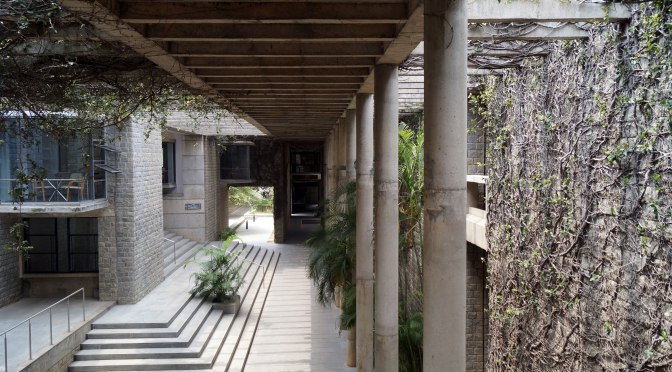 Designed by Balkrishna Doshi / Vāstu Shilpā Consultants, the Indian Institute of Management in Bangalore is an important site for the heritage of modern architecture in India – a study in the possibility for architecture to assimilate time and human presence in a composition of the built, open and in-between spaces.

The Plan as a Generator

The Indian Institute of Management campus in Bangalore occupies about 54,000 square meters within a 100-acre site. Designed as a poly-nuclear plan, the overall spatial arrangement relies on a series of intersecting corridors that form the basic skeletal structure.

The functions are organised within this orthogonal plan punctuated with gardens, spaces for pause, spaces for chance encounters, and informal nodes. Staircases connecting this corridor to lecture-halls, meeting rooms and other ancillary spaces serve as transitions – podiums to view the landscape as one moves vertically. This system makes allowances for light, breeze and vision to move freely within the plan. The asymmetry of the diagram is deliberate – the generator and container of life within. 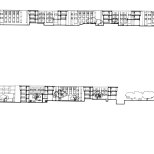 The architecture of the IIM resists the clear and precise image. Over time and through repetition, one can grasp the arrangement of the plan and the sequence of spaces that flank the corridors but by negating formal clarity, the building gives preference to the experience of traversing through its in-between spaces. The spatial experience is heightened by the frequent changes of scale and the occasional breaking of the form of the corridor. The allowance of the landscape to intersperse with the built form enables the building to create soft, loosely defined edges. 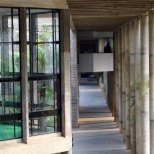 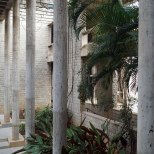 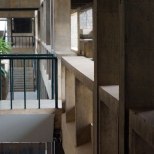 The unveiling of the IIM to an observer leans on a sequence of spatial experiences. The overall sequence of movement – from the lush, open campus to the semi-open corridors and eventually to the more enclosed and protected spaces generates multiple threshold conditions. These unique locations in the plan allow the functional spaces to interact and assimilate more freely with the overall scheme creating a set of fluid and easy connections between the spaces for movement and spaces for work. In the third dimension, the plan creates much complexity and layering. One can observe the emphasis on the diagonal while moving through the complex as these layers are revealed. 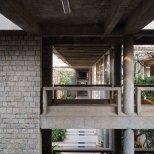 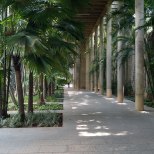 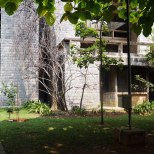 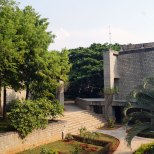 Hand-chipped granite and concrete are the two primary materials that compose the space. Combined with the floors made of rough and polished Kota stone, the buildings create a silent, neutral palette for more animate objects like trees and humans to occupy. IIM Bangalore is a tactile building. As the sun moves, the internal spaces are in transition and the presence of time finds a wonderful expression through the ever-changing light within. The granite walls – now flanked by healthy vegetation receive and release the light gently while in the monsoon, the corridors are swept by mist. The boundaries between inside and outside are completely blurred and what could have been a harsh palette of materials in the absence of the landscape, is now a backdrop for the rich flora. It is in this act of gently balancing the opposites, that the experience of meandering within the campus is captured. 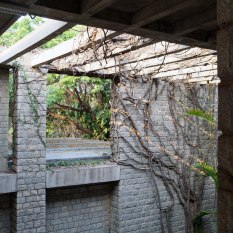 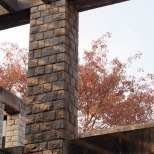 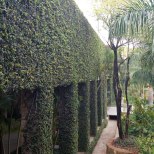 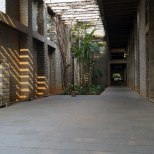 Theme and Variation; Solids and Voids

In the figure-ground study of the IIM campus, one can observe the unusual significance rendered to the ‘in-between’ space. This exceptional strategy enables the institute to add and assimilate more functional demands over time. The recent addition of a block by Mindspace Architects exemplifies the potential of the plan to grow and become generative of the growth. By refraining from creating a clear centre, the scheme allows new spaces to amalgamate with the original plan. The orientation, sequence, hierarchy and relationship of the voids is critical to the scheme. These sets of open-to-sky and semi-open spaces form a code of the place gesturing towards possible avenues to add, edit and alter the more functional spaces without compromising the beautiful idea. 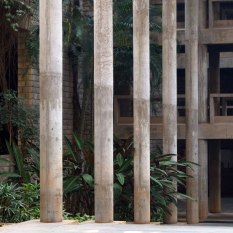 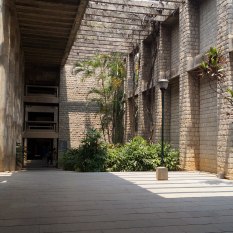 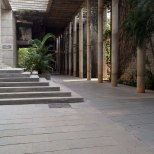 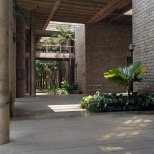 The juxtaposition of the built space and the landscape with life creates an uncertain sequence of events that define the beautifully amorphous space within the IIM Bangalore campus. As the relationship between humans and their built environment becomes increasingly deterministic – defined by cause-and-effect programming of contemporary buildings, The IIM Bangalore campus proposes an alternate view – the one in which the built environment enables the linearity of time to be disrupted. ♦ 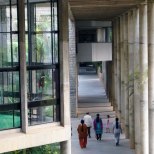 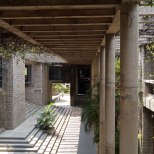 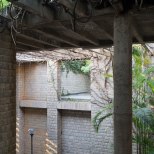 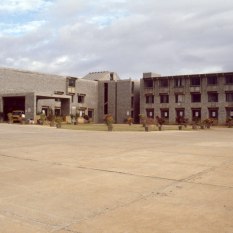 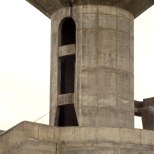 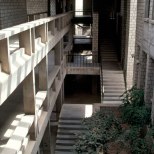 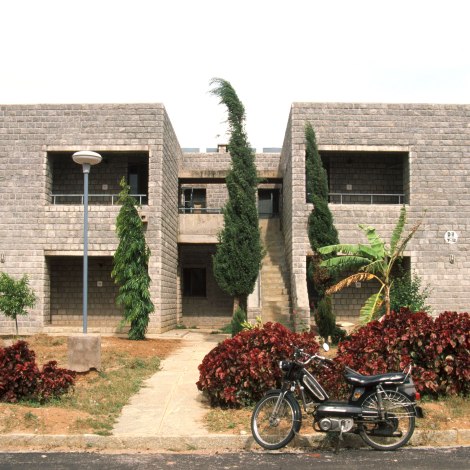 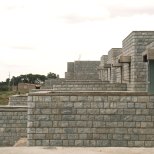 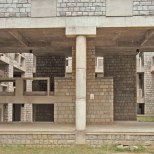 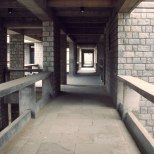 Dr. Balkrishna V Doshi, a Fellow of the Royal Institute of British Architects and a Fellow of the Indian Institute of Architects was born in Pune in August 26th, 1927. After initial study at the J J School of Architecture, Bombay, he worked for four years with Le Corbusier as Senior Designer (1951-54) in Paris and four more years in India to supervise his projects in Ahmedabad. His office Vastu-Shilpa (environmental design) was established in 1955. Dr. B V Doshi has been a member of the Jury for several international and national competitions including the Indira Gandhi National Centre for Arts and Aga Khan Award for Architecture. Apart from his international fame as an architect, Dr. Doshi is equally known as educator and institution builder. He has been the first founder Director of School of Architecture, Ahmedabad (1962-72), first founder Director of School of Planning (1972-79), first founder Dean of Centre for Environmental Planning and Technology (1972-81), founder member of Visual Arts Centre, Ahmedabad and first founder Director of Kanoria Centre for Arts, Ahmedabad. Dr. Doshi has been instrumental in establishing the nationally and internationally known research institute Vastu-Shilpa Foundation for Studies and Research in Environmental Design. The institute has done pioneering work in low cost housing and city planning. In 2018, Dr Doshi was conferred with the Pritzker Architecture Prize.