With a collection of essays on preserving our architectural heritage, Kulbhushan Jain attempts to spark the ever-passive conversation on conservation practices in India: the good, the bad and the ignored parts of it; in his recent work titled- ‘Conserving Architecture’. The compendium discusses the multifarious approaches that are needed to address the grey area between heritage and modernity, the need to find a common ground between the two.

From the onset, the book talks about the various criteria and systems of heritage categorisation in India, the scale of interventions and their efficacy. The essays incorporate personal experiences of various conservationists and architects, their motivations and struggles along with archives of various pivotal restoration projects. Jain points out the lack of awareness on the topic in our country and questions the systems of heritage classification, the interventions and their paucity in Indian context. 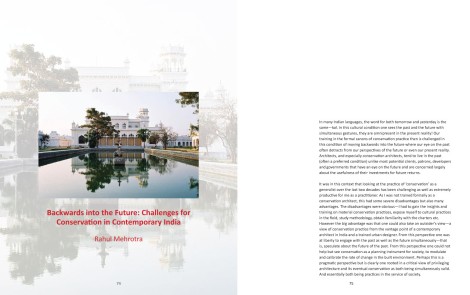 Page Spread: Backwards Into The Future by Rahul Mehrotra

Parts from the collection analyse the disregard for context in our conservational practices. Structures in dire need of restoration face struggles to meet political approval while on the flip side, there are sites which have been converted into stretches of manicured garden to appease tourists. Authors stress on recognising the line beyond which an intervention trespasses the integrity of a site. Achieving this balance of effort is one of the fundamental challenges in this domain. How much is too much? Or too little?

In the words of Jain, “We are still grappling with this misplaced notion of beautification of a heritage site in order to satisfy expectations of visitors who come to the site.”

Delving into the nitty-gritty, sections from the chronicle draw comparisons between India and European countries in terms of embracing heritage, the eagerness to invest in modernization rather than preservation, and the fact that inspite of having a rich heritage, India has very less to show for it. The counter argument makes a point of contextual and cultural differences of the said countries. The authors explore various aspects of architectural conservation thus igniting a healthy dialogue of professionals and implore us to face our oversight for architectural history.

Throughout the book, there is a common undercurrent of concern for the future of our past. How do we make way for the new without being stuck with the nostalgic idea of a magnificent past? Or are we breaking down everything we have in lieu of copying the West? We learn from our history but how long can one hold on to the edifices of forgone times in a notion of conservation? The authors in their discourses, answer some of the questions, pose some more.

A recent example of this can be seen in the Hall of Nations controversy in New Delhi, where people from the architectural fraternity united to protest against the demolition of Raj Rewal and Mahendra Raj’s modernist legacy. The authorities decimated the structure, making way for new exhibition space. While each party had their own reasoning, it raises concern of which side the future is on and who is more right.

The European or British conservation policies and practices, embedded in our legislation since aeons cannot always cater to the local requisites. Theirs is a unique canvas and so is ours, ingrained with deep-rooted religious philosophies, traditional values and blended cultures. Conservation ethics for each country, in fact each locale needs to be tailored to match its cultural fabric. The dynamic of every city is different, a practice that is welcome in the kinetic rhythm of Mumbai may not be embraced in the nostalgic grandeur of royalty in Mehrangarh. Indian architecture has evolved over a change of dynasties and economies. Unlike West, there is no major event that can mark the end or beginning of a style. It’s a chaotic mix of various materials, cultures and artistry that still stands proud in its entirety. 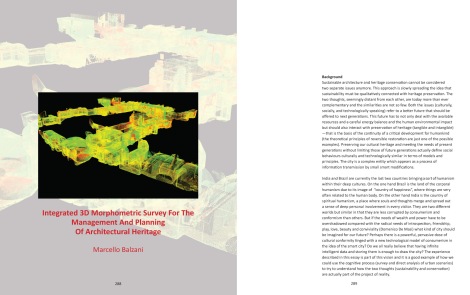 The chronicle hits a sore spot by questioning the inability to put thought and investment into preserving  heritage; the lack of effort in technical training of conservationists and the incompetency of the education system in place. Some sections point out the fact that in India, the significance of conservation of architecture is overlooked due to more pressing political issues. It also touches upon the motif of ‘reversible restoration’: the idea that our present is the future’s past. What are we going to leave behind if we are so fascinated with what ‘was’ that we lose sight of what could be? While conservationists prefer to revel in the heritage, developers and patrons tend to lean towards the future. Coexistence of conservation and development is a delicate equilibrium we constantly strive to achieve.

“This landscape is characterised by intense dualities where modernity and tradition, prosperity and acute poverty, communality and communalism, medieval society and cutting-edge technology coalesce to create seemingly incomprehensible cities.”

Page Spread: Documenation of Reconstruction of Temple no. 5 at Ashapuri

The book holds archives of significant restoration projects such as the Chowmahalla Palace in Hyderabad, Tassoni Estense Palace in Ferrara, Jaisalmer city, St. Thomas Cathedral in Mumbai, Adalaj Stepwell in Ahmedabad etc. The authors highlight diverse approaches in conservation practices: from the use of cutting-edge technology in case of Arese-Litta Palace in Milan, to restoration from manual sketches in Ratneshvara Temple in Patan. With plenty of pictures to complement the references including technical drawings of some restorations, the book urges one to be conscious of the legacy our country has. The book is introspective without being resigned about it.♦ 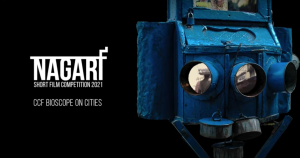