Amidst the urban conglomeration of Durgapur sits the IQ City Township, replete with a dedicated institutional and medical precinct. A recent addition to this is a 45000 sqft Nursing College designed by Kolkata-based Abin Design Studio. Ayan Sen, Principal, Ayan Sen Architects, analyses the response and rhythm of this new insert into the existing planning scheme and writes this piece as an insight into the functional and spatial aspects of the design.

The master plan of the IQ city project attempts to create a theme-based township which has been the trend for some time in the country, some of them being conceptualised in West Bengal. 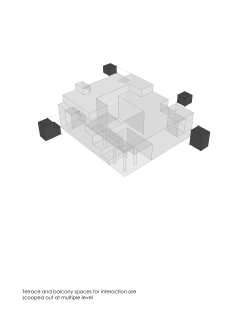 Drawing: View of the Entrance

The 100-acre development revolves around a medical infrastructure core with a medical college, nursing college & a hospital. The idea of setting up a nursing college to provide support to the hospital & create educational infrastructure as an opportunity in this planned town was a critical part of the programme. Hence, placemaking of the medium-sized facility was critical. The design by Abin Design Studio has evolved around a very simple programme. The Ground Floor houses public zones like common room, multipurpose hall, conference rooms and meeting rooms. The First and Second Floor houses the faculty rooms, laboratories & classroom. The Third Floor comprises of lecture rooms only.

As a master planner, I have been involved in creating the land views and zoning plan of the project, and hence, it had been particularly interesting for me that this core complex, the first area in the master plan, sets up a strong precedence to the development of other land parcels that would come up in the future.

The scale of the plaza is both inviting & engaging. The plaza seamlessly flows into the inner courtyard creating a microcosm for the college. The visual connection from the outside to the inside court exposes the world within. The stepped terraces allow the spill-over areas from the library to connect with the forecourt. The spaces revolve around the courtyard making all the functions look towards the inner court. 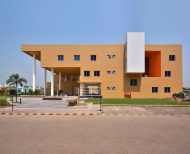 One of the most significant aspects of the buildings is the proportion & scale of the openings that creates a hierarchy as well as a variation within an overall order. The voids that are scooped out of an overall cuboidal form, are the activity areas where social interaction can happen, making the programme richer.

In the profession of caregiving, the institution has underlying sensitivities that make the project apt to the programme. Some functions like the auditorium have larger spill-over area articulating the semi open spaces. The colour & proportions subconsciously pay a fitting tribute to the master of proportion & space making, Prof. Charles Correa. The simplicity of materials allowed the firm to work within a tight budget while exploring a universal phenomenon of institution-making with simple yet sensitive micro details ♦ 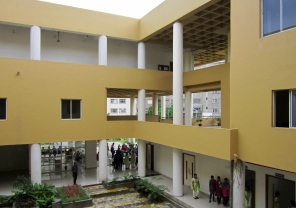 Ayan Sen heads Ayan Sen Architects, a Kolkata-based Architecture and Urban Design Firm. Ayan is a graduate of School of Architecture, CEPT and has done his Masters in Urban Design from Massachusetts Institute of Technology, USA. He provides expertise in the areas of master planning for waterfronts and campuses including residential and mixed-use projects.

His academic and professional research interest is in the understanding of developments through Public-Private Partnerships and interweaving of design and strategic process of development. He is involved in various academics and studies in KRVIA (Mumbai), IIT Kharagpur and CEPT (Ahmedabad). ASAUDP is also involved in research with MIT, USA.

Founded by Abin Chaudhuri, ADS was established as a multi-disciplinary practice in October 2005. Since then, ADS has executed a range of diverse projects that has engaged with multiple issues, and of varying scales, from interior design and architecture to urban design and art.

Their work encompasses projects of varying scales ranging from institutional and urban projects to private residences and installations. A conscious effort to explore the ‘unknown’ journey, experimentation with materials and technology, and the engaging of art and culture has been the approach for realising each project from inception to execution.