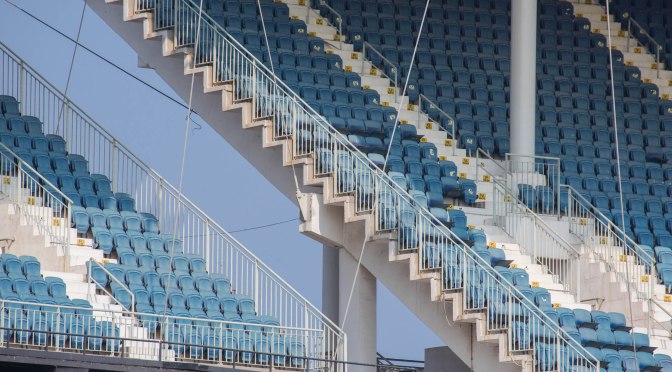 Studio culture – as with all manifestations of the human intellect – is the embodiment of a pattern of work that nurtures the craft of building. Architecture workspaces are especially readable in this context as architects are, in this case, designing for themselves. With every workplace as distinct and specific as the work it produces, the people who design and work in these environments reveal their ideas in the space.

In this edition of the STUDIO series, we enquire about the early beginnings and work ethics of a long standing studio-culture of the Chennai-based practice Nataraj and Venkat Architects, founded by V S Nataraj and A Venkat in 1984.

A quiet pathway trails into the studio space, where dappled sunlight gently wraps its facade forming an interplay of shadows, materials and textures. Chennai-based  Nataraj & Venkat Architects [NVA] is a 30-year-old design practice, and is among the city’s pioneering firms renowned for their contemporary vernacular architecture. In a brief conversation with ThinkMatter, Principal Architect A Venkat discusses the making of a successful practice with a philosophy rooted in collaboration, competition and consciousness.

Q: The practice enters its 36th year in 2020. It has been a few years since the firm moved into a new studio space. Tell us a little about this move.

A Venkat [AV]:  NVA moved into a new studio in 2016 after a conscious decision to create a space that would reflect our work and foster creativity and collaboration. The studio is a manifestation of the firm’s ideals and philosophies, drawing influences from the works of Geoffrey Bawa and Vernacular architecture. Situated on a plot adjoining my home, the studio is a redesign of an existing 1970s residence, retaining the intimate nature of the original construction. Using the existing large open spaces, our team carefully altered some of the load bearing walls while opening out simple volumes to create a central courtyard around which the primary and ancillary spaces are designed.

Imagined as a ‘home away from home’, the 3,250 sq. feet studio is spread across two levels with a terrace doubling up as a recreational zone and dining with an attached kitchen. The idea was to focus on natural lighting, ventilation and visual connection within and outward to the greenery through multiple windows that provide interior as well as exterior views, and catching the sea breeze from nearby. A simple material palette frames the atelier – warm teak wood against white walls, cool greys furnished with slate and an open office arrangement; rendering an unassuming envelope that prides itself in the simplicity of its structure.

Q: Tell us about the early years and the milestones achieved as a young urban practice in Madras in the 80s?

AV: Initially practicing independently, Architect Nataraj and I were brought together in 1984 by the Murugappa Group for their first ever project- the A.M.M. Trust. Soon, a level of comfort was established between the two of us which led to the setting up of an office in a 22 X 22 feet room under a thatched roof. Known for our traditional sloped roofs and courtyard style architecture, NVA was instrumental in designing and developing many of the city’s earliest residential locations, such as the ABM row houses in Kotturpuram. 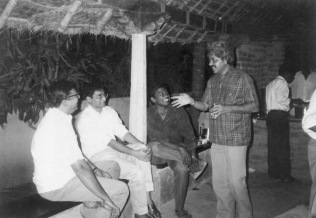 From the Archives: NVA’s first office; seen here is the space under a thatched roof

As connections were fostered, the projects began to grow in scale, transcending the design of residences to schools and institutions around the city. The intention of giving back to the community resulted in word going around about our work, enabling us to expand as a firm while exploring newer avenues. While forging an identity with a familiar traditional style of architecture, but with the advent of newer building materials and construction techniques of the late 1990’s, the firm boldly ventured into modernism, designing Chennai’s first fully glazed building, the Westminster, as well as the city’s first Information Technology building for Ramco Systems. 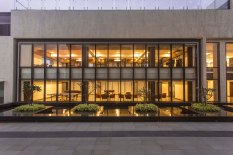 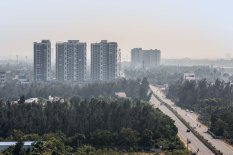 Altis Oceanique and its environs

Three decades later, today NVA has an extensive portfolio across four main verticals – Housing, Institutional, Commercial and Renovation. Spearheading the design of the city’s renowned cricket grounds, M.A. Chidambaram (Chepauk) Stadium as well as luxury apartments such as Ceebros One74 and Oceanique, NVA has managed to carve a name for itself in the architectural repertoire of the city old and new.

Q: How would you describe the structure of your studio?

AV: In theory, the studio is structured into teams, each led by a senior architect, some of whom have been associated with the firm for over 10-20 years. However, the boundaries between the teams are blurred since the senior architects intuitively follow a similar framework for design, scripted by the philosophies of the firm. Design and team review meetings happen regularly for us to critique, assess and reflect on our internal process going forward on projects.

Q: You have a unique legacy – a practice that is three decades old and still firmly grounded as a studio-practice. How does this manifest into your workspace?

AV: Context is key in every design process. The practice is rooted in being sensitive to the needs of the client and understanding the economics behind large scale projects, thus striking a balance between the developer and the end user. From commercial projects to restoration, our practice strives on versatility and the decision to take up the interiors of a project, providing a holistic experience to the client. We have adapted to the changing trends and have a dedicated team of architects and designers who work on the interiors, be it a 1,000 sq. feet apartment or a 1 lakh sq. feet office. An expansion in resources has meant that the office is now divided into teams, each led by a senior architect with an individual design sensibility, but one that has been shaped by experience in the studio over the decades.

Studio NVA amidst an engulfing landscape

Merging ideas between clients, engineers and contractors, our approach draws on the strengths of individuality to foster a collective spirit. To this extent, the architects attribute the environment of the studio to be their biggest inspiration, constantly reminding them of what they are capable of. Working in an office that is located far from the bustle of the city gives the architects greater peace and quiet, enabling enhanced productivity and rigour, especially  in the preliminary stages of design development. The people, the greenery and the sea breeze render a touch of calm to the space, further showing clients the calibre of workmanship and thought that goes into the design process ♦

Courtyards over the years
Courtyards have been an integral part of NVA’s architectural vocabulary from the early years. The planning of rooms around this central space is a an essential fragment of the South Indian narrative of a building typology.

Experiments in Housing
The economic liberalisation of the 90s opened up the residential market to the common man offering variety housing in the form of apartments, row housing and townships. 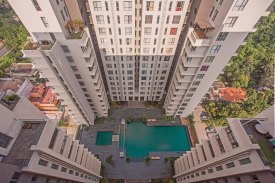 Commercial Buildings through the years
The economic liberalisation of the 90s also opened up the commercial market and NVA was fortunate to be a part of the vision for this infrastructural development. 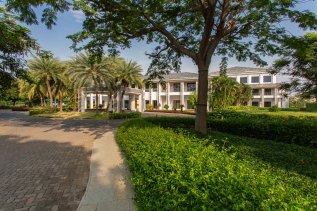 NVA was founded in 1984 by V S Nataraj and A Venkat. Since then they have successfully designed a diverse range of public and private buildings as well as interiors. The firm has gained acclaim for the architectural and commercial success for their work, and the unique collaborative approach learning from one another to devise fully integrated design solutions.

STUDIO is a feature that documents <work and workspace> dynamics of an architectural firm in-turn unravelling processes intrinsic to their practice. 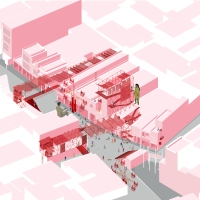 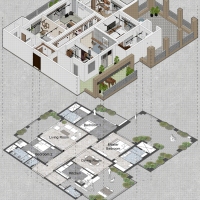 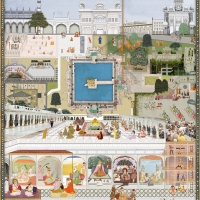 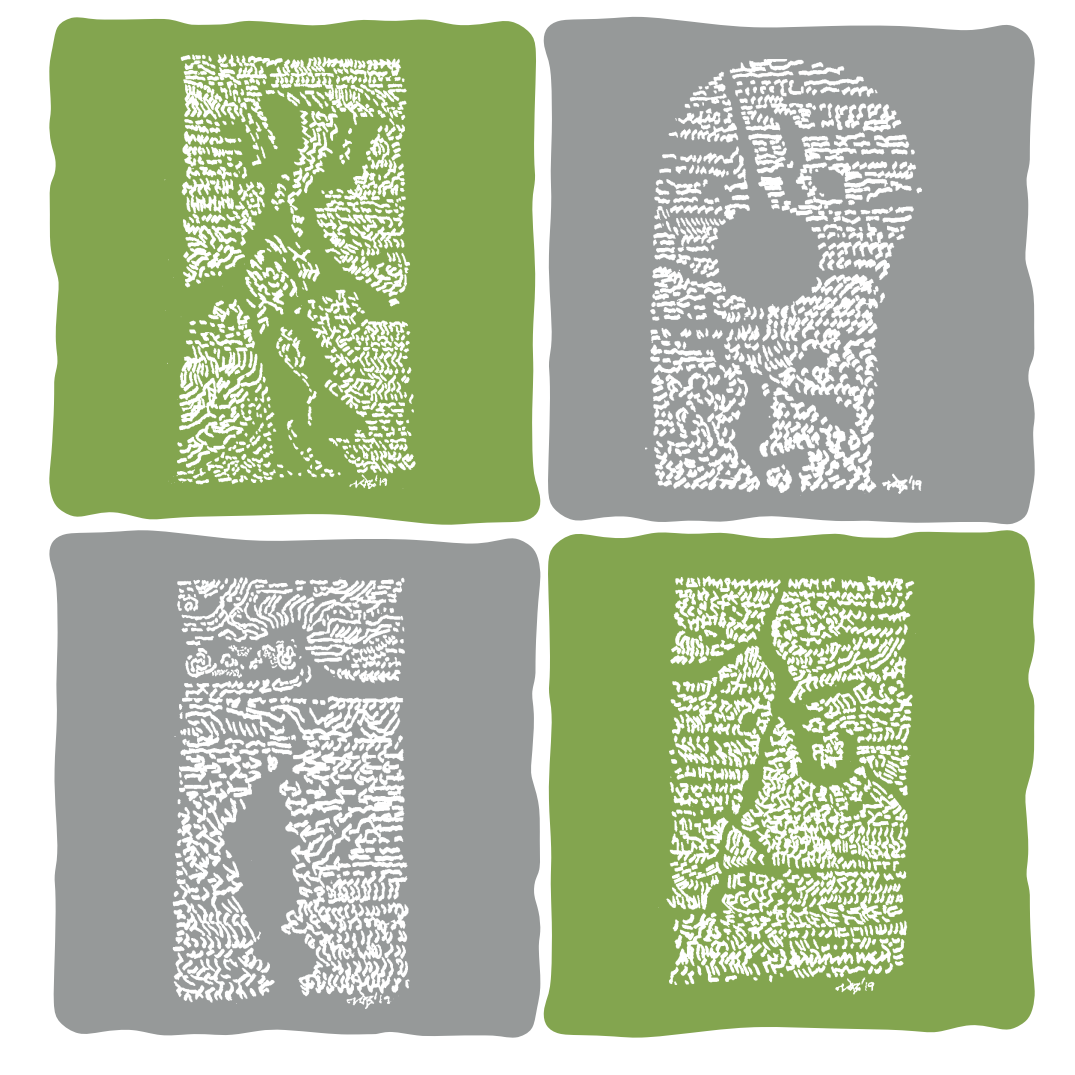