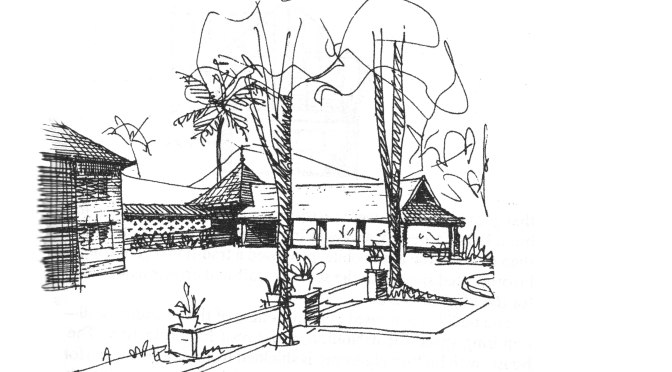 Reprinted in 2014, this book authored by Gautam Bhatia makes an invaluable contribution by documenting the intent and ideas attached to the prolific legacy of Laurie Baker that secedes from the conventional notion of architectural practice. In his preceding author’s note, Gautam Bhatia writes, “The book was originally intended to be a guide to his method of building, but over the many meetings in the verandah of his home, the Hamlet, and the numerous visits to the sites (occasionally carrying a client’s door on the roof of his car) and watching him communicate with the Malyalee masons with vigorous gestures, I came to realise that Baker’s architecture is a by-product of a larger picture – a picture that recognises the importance of people’s aspirations for a better life. I began to see that his buildings were merely a direct and honest response to this spirit, this idea. It was after having realised this that the book took a different turn.” Issued in paperback, the book is eponymously grouped in three distinct parts with brisk chapters – Life, Work & Writings.

Structured around this premise, the book approaches its first grouping entitled ‘Life’ over broader precepts such as Influences, Context, amongst others rather than telling a story of progressions. Composed with the author’s own succinct narrations, quotes by Laurie Baker cited from various features enables the notion of a dialogue. The second section is a repository of selective buildings accompanied by compellingly detailed information together with archival photographs of the projects and meaningful illustrations. The text recognises ideas inscribed within the intelligent, relevant and flexible spaces, and they are distilled and elaborated upon to create a comprehensive body of information. The simplified drawings recreate the details to convey precision and the framework of the whole composition outlines the conceptual edge of each project. As you read on, the manoeuvres make for a routine. Common themes emerge and the cognizance of the well-informed details contain and explain the social and material dimensions of the inclusive manifesto that Baker followed. These interventions transform the idea of architecture into one that is incredibly liberating wherein there it denounces an engagement with pure aesthetics and tenders interpretations on how the inhabitant and the vernacular informed the shaping of plan configurations for most of Baker’s projects. In the essay, ‘Building and Practice’, Bhatia writes of these projects, “They demonstrate the determination and the continually experimenting and expansive will of the man who has created them.”

The third section offers powerful insights on the issues of housing, ‘Architecture and the People’, ‘Proposal for a Core House’ etc, through unpublished papers, papers written for symposiums in form of perceptive and incisive commentaries. Excerpts are published from his cost saving manual with simplified elementary diagrams – a crucial characteristic of the codex. These also provide an instructive context for some of the details referred to in the text. The book ends on argumentative concluding note with a Letter to the Minister for Works and Housing written by Laurie Baker presenting a case for the need of a realistic policy to be adopted for housing.

Here lies much of the value of the book as well as in its descriptive verve. It is hard to identify the most rewarding parts of the book, if they can be differentiated as such. The prose does not prioritise, and inject grander narratives but personifies many of the Baker’s key ideas. In discussing the former, Gautam Bhatia mentions in his note, “The directness and simplicity of Laurie Baker’s own work made it essential that the book be intended for all: the interested lay reader, the architect, and the student of architecture – anyone with even a passing interest in ideas of design, low cost building, or the life of a committed individual.” Within black and white pages, the quality of the production is uncomplicated which befits its content.

Supplementary to the Costford publications, it not only expands on Laurie Baker’s values and beliefs, but chronicles a body of work so momentous, culturally and economically that is as relevant, if not more, even today. Hopefully, it will give impetus to a much-required debate on the role of architecture in India within the contemporaneous culture, existent more as a concern with spectacle and a disconnection from reality.

In reflection of the present narrow architectural discourse and criticism, and the ignorance of the larger section of the fraternity in face of pressing problems such as sustainability, this book prescriptively should be widely read.