Away from the urban context, a conspicuous red office and laboratory block designed by Sachin Agshikar injects substance and presence into the banalities of an unconscious, utilitarian aesthetic of a cement factory.

While the architectural discourse of the day is focused on diffusion and the unease of influence and inspiration of globalisation, there exists a set of environments far more informed and standardised by thoughts and needs, an identifiable cyclical progression untouched by visually referenced design, located often in the fringes of our cities. Where functions take precedence, these stark realities in form of industrial precincts remain always abaft to the urban fabric, ineluctably as a pragmatic ethos rather than a designed one. And though these are daily encounters, the internalised profession of architecture contributes barely a response to this collective imagery. Yet one hopes to believe that there might be potential to overcome the limitations of the profession to be more assertive and exploratory with the architectural form to complement a strongly functional ethic such as this.

In a north-eastern corner of Goa called Pissurlem, as in any industrial belt of a city, the context is one emerging from a varied industrial aesthetic, bereft of any connect to the diverse layers of identity the city bears. On the fringes of this industrial ethic, a discerningly modest structure provides an apt space for engaging with this conversation on architecture of the functional.

There was an initial resistance from the factory workers, stemming from the idea that they would not require an extra dimension of curation for a building within the factory complex which they had built themselves. Realising the mandate for a space conducive to house the labs and offices and enhance visual appeal at the same time, Ashok Kadali, the Chief Engineer of Alcon convinced Anil Counto, the Director of Alcon, to commission the intervention to an architect. Subsequently, Sachin Agshikar was approached and he initiated the design process on a small plot located at a pedestrian nexus just beyond the entrance gate.

Within this fragmented and exposed monumentality of the huge premises, two thought worlds exist and possibly now are united by laying bare the essential characteristics of a designed space. The architectural vocabulary of the new structure across 537sqm of built-up area plays on dualism – of solids and voids, and of contrasts in character. “Having these huge cylos as a backdrop to my building was already an interesting composition,” says Sachin, “Looking at the surroundings and considering the overall scale of the factory, one thing was very clear that the building had to be sculptural and needed a strong colour to stand out. The building was intentionally made of three stories to give it a scale. The water tank was placed in a triangular tower in the corner facing the entrance gate. The sharp corners of this tank complemented by the angular wall of the conference room on the first floor were enough to give the building the sculptural look I intended to have. It almost tells you a story of how the cement produced in this factory has been used by the architect, engineers and the masons as a medium to create something fascinating.”

Architecture herein evolves as a cognitive style, mostly as a general theory of design and resource, collectively staged within modern precepts. Enclosed and elegant, the exterior envelope emboldened in an earthy red is very much part of an ethos much prevalent in the Goan sense of colour. The volume of the space over three storeys is resolved as a dynamic active on the building’s perimeter with angled walls, large surfaces peppered with carefully placed openings – an exercise that is conceptually strong, both programmatically and visually. 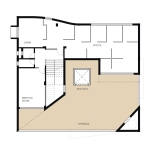 The basic schema is clustered around a square core with rooms on the periphery oriented towards a courtyard with a skylight in the center. Within the monolith of converging solids and voids, the entrance is carved out to lead out directly to this court. The ground floor surmises of the labs, cabins and a store. One moves upwards towards the upper floor where in reference to the periphery of the built below, the occupation of the first floor sets up a diagonal – one half of which extends as a terrace from a L-shaped built matrix of a meeting room flanking the staircase on its northern end, a cabin upfront and offices to the south. One corner of the terrace is subtly interrupted by the triangular planes of the water tank and the skylight dominates its nexus. Owing to the staggering of the envelope, each programmatic element is replete with its own distinct identity. This vertical move momentarily shifts the structure away from the regularity of the quadrangular axis. There are many such individualistic moments choreographed in the narrative; such as the curvilinear edge of the eastern façade, the windows of the meeting room recessed by the projections, and the extruded rectangular edges framing the windows. It is designed as an object balanced and grounded by all these elements in deference to the permanence of the immediate landscape.

The terrace carved out on the first floor.

The sculptural aesthetic develops from a cumulative dynamic of elements such as the staggered openings and extruded frames.

The spaces are articulated as an interplay of solid and voids.

The monolithic structure infuses a grounded imagery juxtaposed against the calculative functionality of the factory structures. 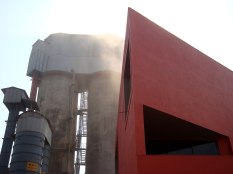 The construct in its entirety adheres to the embodied routines of the workers and offers to rethink their own perceptions of the space they inhabit. Organically, it processes an extra depth that the building lends apart from being a statement of architecture which deals with the idea of collaborative processes introduced within the current working structures of the factory. The project elaborates on the flexibility of adhering to a system of pure planning principles and bold use of colour, even when applied to something as functional a setting as this – a design that is mediative in both function and aesthetic. 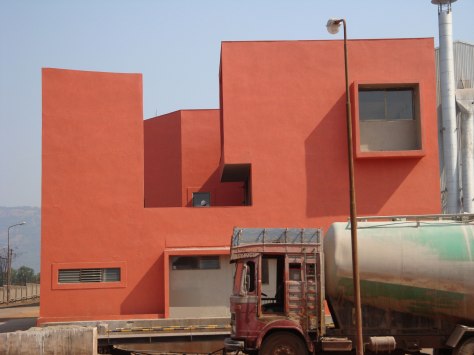 The project stimulated by spatial thinking may find itself in a wider discourse of this facet of architecture, where no clear model exists. As postulated, by harnessing good design, as a possibility of integration of scales, the project can be translated into an analytical device to review this obvious gap and to act as a threshold where exchange can take place. 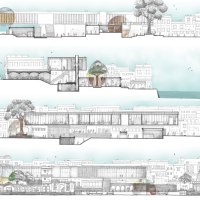 Praxis Conversations: A glimpse into our fifth episode of the PRAXIS initiative: Bhavana Kumar and Nicola La Noce of Bengaluru-based Kumar La Noce revisit relevant experiences in their practice and examine the impact on the way they think and design. The dialogue dwells on impressions from their earlier years, their recent works, and collective memory. Stay tuned for more! 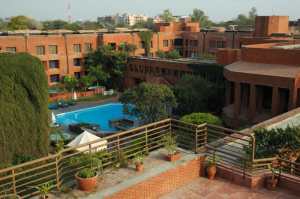 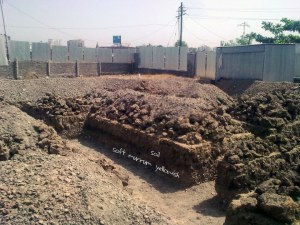 Book a Week Podcast | Abin Chaudhuri: Making of a Place, A Productive Collaboration between Practice and Community 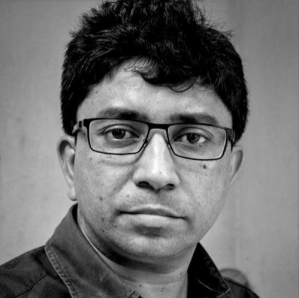