An engaging reprint of the seminal book by Curtis takes us through the experiments of the defining years of Doshi‘s practice – a practice that has presented us with some of the most challenging axioms and paradoxes of modern architecture in India and eventually – ‘an Architecture for India‘.

India, in its defining years after independence had its eyes pointed rigidly on the future. In this uncertain time, one of the greatest experiment in Modern Architecture was being conceived in the form of Chandigarh. This is the beginning of Doshi’s story.

The return of the book after almost 2 decades of scarce print and prized circulation establishes the indispensable relevance today of the work of Balkrishna Doshi. ‘An Architecture for India’ is a chronicle of the crucial struggle that the early modern architects in India were immersed in – a struggle to make sense of the powerful modern movement that had taken the attention of the world against the ethos of an ancient civilization which was firmly rooted to its culture and landscape. The work of Doshi in the formative years of Vastu Shilpa Consultants took this conceptual struggle heads-on while looking for newer and contextually relevant ideas that according to Curtis “combined certain enduring values of Modern Architecture with research into the substructures of Indian Architecture”.

Principally monochrome with colour plates in the segment with works, the four sections of the book deal with Doshi’s architecture and ideas on design, housing, urbanism and the relevance of India in all his endeavours with 20 projects in the background of the narrative. A visual sequence takes the reader on a path that meanders from clusters of small vaulted houses for the staff at A.T.I.R.A to large campuses like the IIM Bangalore – all tied with a narrative thread.

CEPT Page from the Book.

Image of the Book.

The first and the last parts of the book are dedicated to ideas. An essay by Curtis touches upon some intriguing concepts but the discussion towards the tailing end with notes from Doshi’s diary outlines the experiences and concerns of an individual that formed him to be an ‘Indian Architect’ all the while assimilating influences from masters like Le Corbusier and Louis I. Kahn.

On the whole, the paperback is a nostalgic wonder. It reminds you of an India that did not make a deal with globalization but struggled to modernise on her own terms. 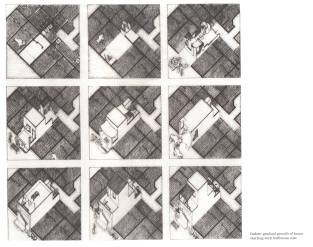 Page from the Book.

Spread from the LIC Housing project.

Note: Book can be ordered from Vastu Shilpa Foundation <vsf@sangath.org>

2 thoughts on “Balkrishna Doshi: An Architecture for India”

Prem Chandavarkar: The Covid Pandemic: Seven Lessons to be Learned for a Future.

Hussain Indorewala & Shweta Wagh: After the Pandemic, Will We Rethink How We Plan Our Cities?

Ranjit Sabikhi: In Light of the COVID-19 Pandemic, the Central Vista Project Should Be Reviewed.